Dear Friends, It is my pleasure to introduce you to Lynda Kresge, traveler extraordinaire.   She has agreed to be my first Guest Author, so that I can share with you her delightful piece on Dogsledding in Lapland, a region in Finland, about which many of us know very little.  She researched and planned this solo trip to a place that  always fascinated her,  prior to joining a group and traveling to Russia.

Although Lynda subscribed to my Biker Chick Gone Crazy blog for several years, and now reads stories on my website,  we have never met face to face, although we came close a couple of times.   Knowing our similar interests, a mutual friend introduced us via email because Lynda had just completed a trip to Myanmar, and our mutual friend knew that Bruce and I were about to visit there.   We “clicked” immediately over our shared love for travel and writing about our adventures.   Ironically, last year Lynda preceded me on an expedition  to Antarctica, which made her an excellent resource for what to expect and how to pack since we were taking a trip there a few months later.  Now she is traveling in Lapland, a place I have never been.   Although I generally prefer warm to cold, Lynda’s fascinating description of her dogsledding experience in Lapland makes me wonder whether I should turn on the air conditioner, dig out the heavy parka I wore in Antarctica, and think about going there.

Lynda Kresge, of Princeton, New Jersey, is a retired university librarian, who is happily spending as much time as she can researching and participating in travel adventures around the world.

DOGSLEDDING IN LAPLAND by Lynda Kresge

Driving a dogsled, I discovered, is an exhilarating and intense experience.  Let’s just say, I won’t be signing up for the Iditarod anytime soon!  We had a perfect sunny morning to be out with the dogs — perfect for us anyway, but for the dogs a little warm at 35 degrees.  They are happiest and most comfortable when it’s below 20 (or even 20 below).  So, for much of our 8-mile route their tongues were hanging out, and when we stopped for a breather, they would dive into the snow to cool off.

I now believe what everyone has told me about these dogs:  They live to run!  In fact, you cannot control your sled speed except by stepping on the brake (basically just a piece of steel between the runners that bites into the snow below), and if you want to stop, you have to stand on the brakes with both feet.  As soon as you let up, they are off.  It’s a bit of a balancing act to keep your feet on the runners (or brake) and not lose control.  I really didn’t mind at all when the dogs had to slow down and pull harder to get us up hills.  And if you stop for any length of time, they start jumping and barking, eager to be off again. 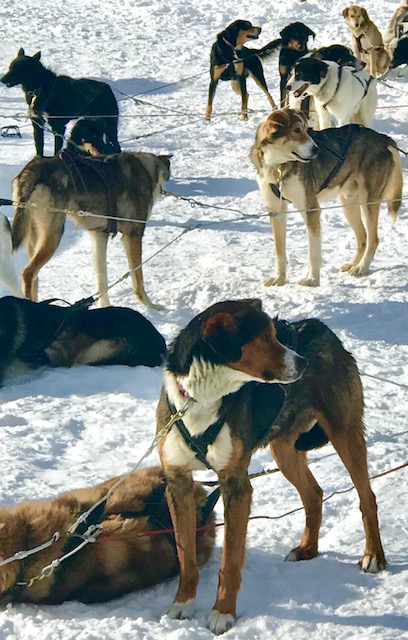 The track for the sleds is wide enough for one sled, so the rule is that you stay back a safe distance and not run into (or alongside) the sled in front of you.  I had a team of 4 dogs; the family of four behind me had 6 dogs; the couple behind them had 5.  All I had to do was keep my eyes on the guide sled in front of me and one foot on the brake.  Not a lot of time for sightseeing!  Still, it was fun to be careening through the sunshiny forest with nothing but the sounds of the sled runners on the snow and the dogs’ paws hitting the track.

Afterwards, we talked with our guide about the dogs and their training and visited the puppies.  They start training at 4 months — first getting used to the harness, then pulling a sled for one kilometer paired with an experienced dog.  They work their way up as they learn from the older dogs, and usually are 2 years old before they are included on runs like ours.  All of them are Alaskan huskies (Siberians are considered too independent to work well on a team).

* Caveat from Lynda:    Since I post whatever the guide says and didn’t research the sled dogs part…..my friend who was in Finland in January said “So, our dogs were a mix of Alaskan and Siberian huskies and Malamuds.  The husky farm where we stayed felt that the Malamuds were like pick-up trucks — they can pull a lot; the Alaskans can run far, but not as fast as the Siberians.  Our guide said you mix the dogs according to what you’re doing.  I guess, like everything else, there are many philosophies!”    Please note that the breed dog spelled above as Malamuds is correctly spelled Malamutes (PLP) 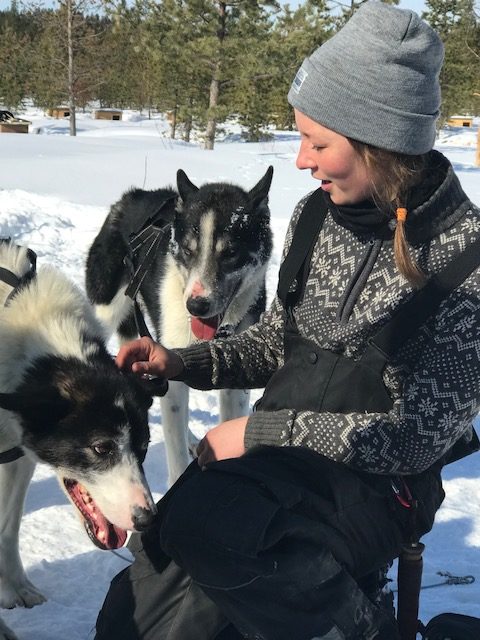 GETTING A LITTLE LOVE

So that was the morning.  Then Juha took me to lunch at the top of a local ski run, next to a little house where he actually was born 35 years ago.  He says the place has not changed in all these years.  They were serving Arctic char and boiled potatoes for lunch.  The views were spectacular.  You could see Russia if you squinted and convinced yourself that those far distant mounds were mountains and not clouds.

I learn a little more about this wonderful host and his wife every day — one of the perks, I guess, of being the only guest!  Juha became a hairdresser after high school, and years later joined the Army and became a Red Beret, in charge of the company that guards the Finnish/Russian border in this area of the country.  He still does that today, responsible for a company of 240 troops.  Then he and Katja owned a restaurant for 23 years, and now they have Javri Lodge.  He is an inveterate outdoorsman, loves all outdoor sports and loves his self-appointed responsibilities as the sports guide for lodge guests and carpentry projects.  I have rarely met someone as in love with life and the outdoors as he is.

Lunch was followed by snowshoeing (exhausting in the soft snow), then sledding down the mountainside.  I had strict instructions to follow Juha and not pass him, and he also provided crucial details about how to slow down, turn and bail if I got scared (!!).  The first half of the run was curvy and fairly steep and a lot of fun.  Then he stopped at a level place and pointed to an ominous red sign near a red fence and a slope that dropped out of sight and announced with complete enthusiasm, “Here comes the steep part!” 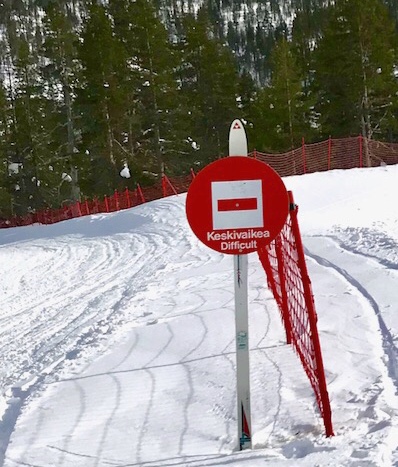