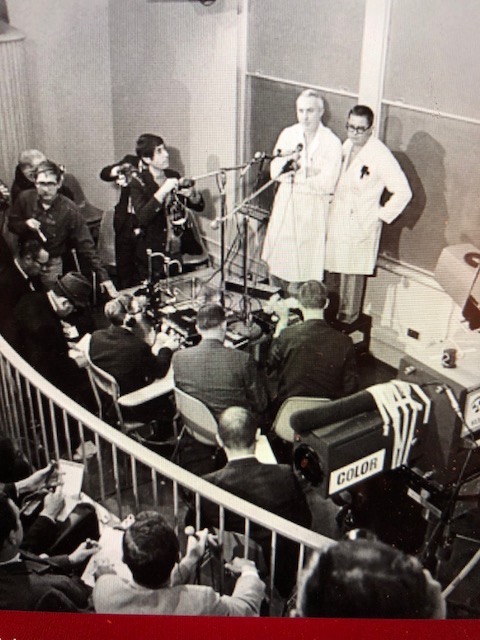 This month marks the anniversaries of two landmark events, both of which changed the future for men and women in our country and around the world.   (1) The Supreme Court’s decision legalizing abortion in Roe vs. Wade, and (2) the first successful human heart transplant performed in the United States.   Interestingly, I had a connection with both major events.

In the late 1950s and early 60s when I was a teenager, three girlfriends, close to me, got pregnant.   This was not a joyous time like it might have been if the circumstances were different.  You see, none of these girls were married, and they were too young and still needing support from their parents to become a mother themselves.  Scared out of their wits,  they knew that telling the guilty boys would be daunting, but confessing to their socially conformist parents would be ten times worse.   Yes, there were tears, sobs, and outbursts, but that was just a little bit of what happened.   One mother said she thought her daughter was “honorable–not promiscuous.”  Another father called his daughter a “whore.”  These girls weren’t promiscuous and they definitely weren’t whores.  They were victims of a little front seat kissing  that led to a lot of backseat loving.   In those days sex education wasn’t taught in school.  Most of us learned about sex from reading the risqué best seller Peyton Place, a book I kept under my mattress and read late into the night with a flashlight so I wouldn’t get caught.   Predictably, the guilty boys retreated into the shadows  and abandoned the girls, which turned out to be a good thing eventually,  but the girls didn’t have any choices except to sacrifice their short-term future, go the full nine months,  and give their babies up for adoption.

Hearing their news shocked me too, but I wanted to be a good friend.  The only words I knew to say were  everything’s gonna be all right, but these girls were in pain and my words meant very little.  I was still a virgin — what did I know.    Life as a single mother wasn’t a consideration back then.  Their only choice was to turn their bodies over to the existing law because abortions were illegal. If you were willing to risk mutilation and death, you might find some shady person who would do it, but it would cost you.   And the cost would be high because many who took the risk ended up nameless  in the morgue.  In those days these illegal procedures were called coat hanger or back alley abortions.   Most girls did what they were told — Give your baby up for adoption.  Until Roe vs Wade, women had no choice.   This was a pre-historic era.

Eventually each friend disappeared from sight, traveling to a distant place to avoid shame and social stigma.  They didn’t want to be called an “unwed mother.”  It was easy to be found out and ostracized in the small town where I grew up.  Like so many other pregnant girls of that time, my friends were burdened with guilt and shame.   I know this because one was related to me.   I knew about the shame her parents inflicted on her, and how disappointed they were.  They said  she embarrassed the family.  If it hadn’t been for her mother, I think her father would have disowned her.  She suffered terribly because she never got the support she desperately needed.  Everybody close to her suffered too because we thought that if this could happen to her, then maybe it could happen to us.  I don’t remember making any conscious decisions about my future as a mother, but I’ve often wondered whether this crisis could have had an affect in my subconscious; could this be the reason I never wanted children?

Two of my friends sought out what they hoped would be unconditional  love and support in a home for unwed mothers, but there were conditions, the ramifications of which nobody fully understood at the time.    After residing in “the home” for only a short time — just so the doctors could document a healthy pregnancy —  the girls were deployed as nannies working for happy families and taking care of infants and toddlers who were wanted, loved and adored.   Innocent  girls were placed in an environment that inflicted more shame and pain,  an undeserving punishment.  Weeks before their due dates the girls returned to “the home” to deliver their babies among strangers and give them up to strangers.  What a dreadful malefaction!   These girls were victims of a prescription that needed to be rewritten, which happened in 1973  with the Supreme Court’s  decision in Roe vs. Wade.

Currently Roe vs. Wade is under assault by relentless pressure from far-right Christian groups.  Planned Parenthood has already been denied federal funding.  Add to this the threat of a feckless president and Congress,  and there is good reason to be worried about the future of our daughters and granddaughters, nieces and cousins.   I hope they will always have control over their bodies, as well as their minds.   The word never to forget is “NO.”

January 6, 1968 – First successful human heart transplant in the United States.   That morning fifty years ago I sat at my desk behind a typewriter in the dean’s office at Stanford Medical School when the head of the medical center’s news bureau, Spyros Andreopoulos, stormed through the front door with exciting news to share.   Dr. Norman Shumway, a renowned cardiovascular surgeon and researcher, was in the operating room transplanting a heart from a man who was brain dead into another man whose heart was so severely damaged that he was going to die.  Up until now this had been an experimental procedure done only on mice and dogs in a laboratory setting and never before on a human being, at least not in the United States.   Spyros was pulling his hair out which he often did when someone called out of the blue to report a newsworthy  event that needed immediate PR.  In the case of the first heart transplant at Stanford,  journalists from around the country and around the world were calling, and Spyros needed some help organizing a press conference at which Dr.  Shumway would give a full report.  We all knew  this medical breakthrough would put Stanford’s cardiovascular program on the international map.  I remember Spyros shouting at my boss, an Associate Dean, saying “Oh, for Christ’s sake, you mean there isn’t criteria to establish what constitutes death?”  What he meant was that, theretofore, the situation where healthy organs were removed from one supposedly dead person’s body to another person’s body had never happened.   There were no rules to determine whether someone should be pronounced dead if his brain stopped functioning, but his heart kept beating.    “This is an emergency,” my associate dean boss said.  “Get everyone together. Pam, bring a pad of paper and take notes.  Quickly.   We need to form a committee to come up with a definition of death.”

Preparing a press release was easy compared to developing the definition of death, but somehow it was done, and I wrote the new criteria down on paper to type up later.  I remember the confusion and the excitement of sitting in a classroom-turned-media center filled with science reporters and photographers with fancy cameras that sounded like firing machine guns.   Everyone shouted questions at Dr. Shumway, still wearing his faded green OR scrubs, after he delivered this remarkable news.  I also recall the devastation when the patient, Mike Kasperak, died days later because his body’s immune system rejected the newly transplanted heart.  What this meant was years of continuing research and development of anti-rejection and immunotherapy drugs. Now decades later with new medications, patients of all ages successfully survive organ transplantation, not only hearts, but lungs, livers, and kidneys too, and most patients live a healthy life for many years after.  Coincidentally, a young cousin of mine, twice removed,  is a heart transplant survivor.  Fifty years ago I never would have believed it.

Click on this link for more information on the first heart transplant in the United States.