I MET HUGH HEFNER ONCE

I MET HUGH HEFNER ONCE

Hugh Hefner has been in the news lately.   Not because he created another media empire or  married for the fifth or sixth  time, but because he died.  At 91 he left a  legacy of  sybarite versus genius, but we all knew him as the guy who started a revolution by letting the sex genie out of the bottle.  And yet there was a lot more to Hugh Hefner than sex, although most people don’t associate him with anything else. 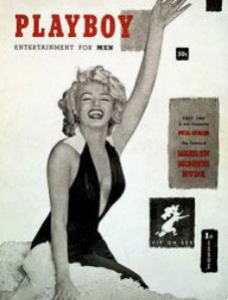 I know just a little bit about this because in the 1960s,  Jim Perkins, my smart and ambitious brother,  worked for Hugh Hefner as director of Playboy Press, a unit that Hefner set up to produce and publish magazines, paperbacks and books.  One of the perks that came with this lofty title for a thirty-something, who was hired after he  passed a two-day psychological exam, was that he could come and go at the Playboy Mansion any time, or at any hour that he wanted.   It was this perk, in fact, that gave me the opportunity to go to the Playboy Mansion and meet Hugh Hefner, whom everyone called Hef, an introduction that had my head spinning.  I don’t remember whether or not I shook his hand, but in my mind’s eye, I still see this rather handsome man, smoking a pipe, and hanging out in his robe and silk pajamas. Other details are a bit vague, but there are scenes I won’t forget, the likes of which a twenty-something New Hampshire hick had never seen until her trip to Chicago in 1966.  Before that summer, I had never been west of Burlington, Vermont.

In 2015 my brother published a memoir entitled, By Way of Luck, an entertaining read with stories about actors, writers, directors, editors, television executives and other celebrities who were part of his fascinating life and extraordinary career as a media mogul and entrepreneur.   In Jim’s book there are several chapters  about his role at Playboy and his relationship with the man everyone called Hef.    Around the same time that Jim’s memoir was published, I spent an evening with my brother and one of his closest friends, Eldon Sellers, another exceptional individual who played an important role at Playboy.   It was Eldon who provided the meager start-up funds for Hef to launch Playboy, and eventually become a vice president who took charge of the company’s copyright and trademarks, in the U.S.  and around the world.   I had the good fortune to be a fly on the wall one evening in Eldon and Nancy Seller’s home in Napa, California, hearing two remarkable men, Eldon and Jim, geniuses in their own right, talk about Hef.   Sure, there were plenty of stories about his multiple playmates, and the fact they seldom saw Hef out of his silk pajamas, but they primarily emphasized his enormous talent, intellect, and his constant drive toward perfection that built the Playboy empire that continues to this day.  They used words like marketing genius and intellectual heavyweight.  He not only opened the door and let the sex genie out of the bottle, but he also opened people’s minds by publishing real literature written by notable authors such as Norman Mailer, John Steinbeck, Jack Kerouac and many others.   I found it amusing to read something in one of Hefner’s obituaries where Hef said to a group of centerfolds at one of the magazine’s anniversary parties:  “Ladies, it has been a wonderful 25 years, but without you, I would have had nothing but a literary magazine.”

Here is a slightly edited excerpt from Jim Perkins’ memoir By Way of Luck that you might find of interest.

“Hef rarely subscribed to his apparent pleasures.  He owned expensive automobiles that other people drove.  He owned a DC-9 jet airplane used largely as a stage with bunnies posing on the airport tarmac, so that he and his retinue of Playboy Playmates could take a jaunt to a distant island paradise.  The House kitchen and food lockers were packed with good booze and aged steaks kept for guests.  Hef drank Pepsi Cola, ate cheeseburgers, had closets hanging deep with tailored clothing, yet chose to live and work in pajamas.  Nor did he ever allow himself to fall in love with any of the dramatic beauties he attracted.  My surmise.  His marriages were likely driven either by guilt or embarrassment, it seemed to me, and not by intimacy or affection.  I think he kept count.  His pleasure was Playboy.  Every issue, every page, every photograph, every text block, he editorially caressed and made his own before releasing it to the printer and distributor.  All rumor aside, the kinky sex and the drugs, except for caffeine and an occasional deadline-induced stay-awake bennie, none of it valid.  He was a sober work horse, committed to self-imposed deadlines, sometimes working 20, 30, 40 or more straight hours, slurping one sugared caffeinated Pepsi after another, and to a standard rarely seen in popular magazine publishing.  He was embedded in Playboy.  Not an issue since the magazine’s origins in 1953, however minute the detail, has been released without Hef’s hands-on-approval.  Today 60 years later, readers are still getting the real thing.”

When I visited the Mansion in 1966, I didn’t see the real thing.   I was way over-stimulated and dazzled by the glitz; and the indoor pool, one that surely most people would call a grotto, was over the top.  It was where I saw the beautiful people, scantily-clad and frolicking about, laughing, drinking and eating good food.  However, it wasn’t until I read my brother’s book fifty years later that I learned about the room below the pool’s water line that had a bench and a thick slab of glass through which observers could watch swimmers doing whatever they wanted underwater.   Since I didn’t bring a bathing suit, I didn’t partake in the fun,  although I doubt a bathing suit was a requirement.  I was too blown away to care about what people were doing underwater.   I was bug-eyed and bashful, just the way I was as a kid when someone in junior high school opened a dog-eared copy of Playboy to show me the centerfold nude.

One of my favorite stories in my brother’s book relates to Hef’s shyness, a persona that the majority of Playboy readers didn’t know.   Here again I will share an edited excerpt from Jim’s book to give you a glimpse of a man who preferred to be masked in the shadow of his public stardom.   I truncated the paragraph just slightly, but included all the good parts.

“One evening, while having a late night drink at the Mansion, Hef’s butler told me there were several men at the front door wanting to say hello to Hef.  Norman Mailer was among them. I asked the butler to find Hef and in the meantime I would let Mailer in.  I wanted to meet him, and I thought Hef might wish to as well.  Accompanying Mailer in Chicago for the annual American Library Association meeting and also at the front door were ALA guest speakers and authors John Cheever, Ralph Ellison and David Halberstam.  The four were among the most publicly acclaimed writers of the 1960s.  Halberstam had won a Pulitzer; Mailer was best known for “The Naked and the Dead,” and both Ellison and Cheever went on to win National Book Awards as well.  I made sure they all had a drink before finding out whether Hef was either awake, working or sleeping.  He would want to meet them.  At least so I thought.  The butler returned and said Hef was working and couldn’t be interrupted.  Our guests were four of the best working writers in the United States, and if Hef were available, not meeting with them would be seen as a snub, however late the hour.  I demurred.  The butler disappeared.  In minutes Hef emerged in pajamas and dressing robe.  He was quickly put on the spot.  The four writers pumped him with questions in picky detail — what it was like being Hugh Hefner, asking about the magazines, about Bunnies and centerfolds, probing for the nitty gritty and prompting Hef to talk about his “Playboy Philosophy” articles.   Hef’s questions were ignored.  He was the greater star.  Late night finally caught up with them, and I walked them to the door while Hef went back to work.  The next day I got a call from Hef’s assistant.  “He says thanks for letting Mailer and his friends into the house.”

So, when I heard the news last week that Hugh Hefner died,  I felt sad. I even stopped what I was writing in an email and inserted my reaction, Oh, my God, Hugh Hefner died.   He was a legend, an icon, a pioneer, and a man to be respected.  Not everyone will agree because his reputation was more about promoting women as sex symbols, not promoting women’s equality and rights.  However, now that he is gone and obituaries are published, I hope that Hef will be recognized as a promoter and leading voice behind some of the most significant social and cultural movements of my generation.  He was not only a tour de force behind sexual freedom, but he promoted free speech and civil rights as well.

If I were the bragging type, I’d be telling people, “I knew Hugh Hefner,” but at least I can say “I met Hugh Hefner once.”