Hola Amigos,  After two weeks in Cuba, where I captured many unique experiences with my camera, my head and heart are flush with soul-filled stories about the local people I met there.

I traveled with Professor Ron Herman, photographer extraordinaire and super nice guy, along with ten fun-loving people. We explored El Oriente, the towns and roads less traveled on the Eastern side of Cuba.    After my first trip in 2012, I was eager to return, primarily to pursue a deeper experience and gain an appreciation for the Cuban people by digging more deeply into their lives and documenting these relationships with my camera.   With politics set aside, I wanted to connect on a more meaningful level, so that I could have a better  understanding of this unique culture, where people live under a frequently criticized government system.

My fearless approach begins with a warm smile and a simple greeting in Spanish.  Sadly, I know only a few basic words, none of which can be strung together comprehensibly to create a sentence, but facial expressions and body language seem to help give a good first impression, at least enough for me to be welcomed into some people’s homes.   The first heartwarming experience I had was meeting a family in the beautiful town of Baracoa. 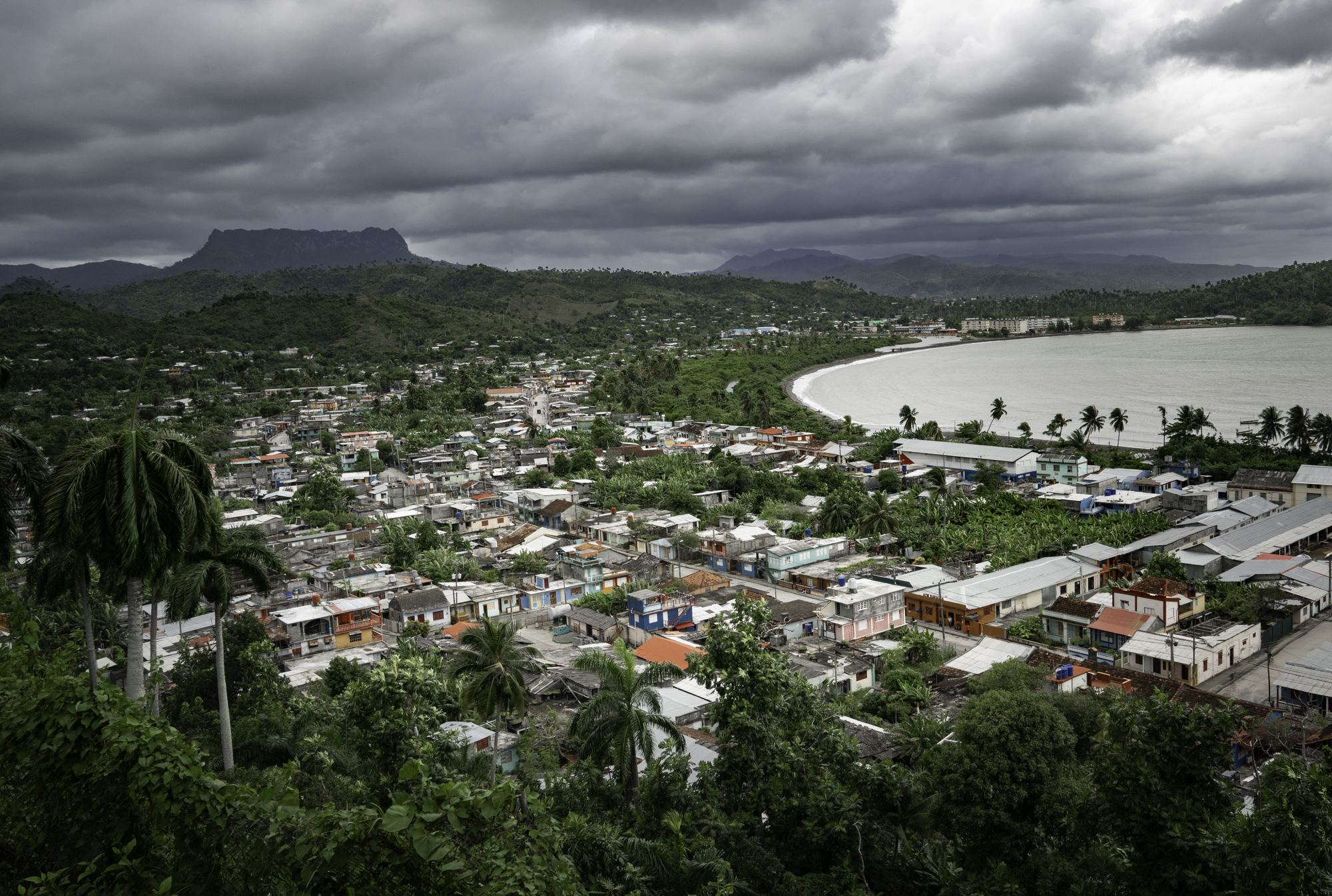 After some time wandering the town by myself, it was getting late, so I looked for a side street that would lead me to the steps up to my hillside hotel.  That’s when I noticed an older man and his daughter sitting on the stoop in a doorway.   I was close enough for them to see me smile, and happily they returned my silent greeting with kind faces and smiles of their own.   “Buenos Tardes,” I said, and as I crouched down to shake their hands,  I noticed the girl, probably in her early twenties, was physically and possibly mentally disabled.  They watched me remove my backpack and search for what I thought would be the perfect gift for this nice looking man.  Among the myriad of stuff I’d brought from home was a set of small tools — four allen wrenches, a couple of screwdrivers, and a small hammer —  all encased in clear plastic.   Unfortunately,  the only other gift in my backpack was a package of socks for a young child, so I felt bad that I didn’t have anything appropriate for the daughter.

With a smile the man nodded in appreciation as he checked out the tools and showed them to his daughter and then to a neighbor sitting on the stoop next to his.  He expressed his gratitude in rapid Spanish, to which I responded  “No Hable Españole,  Hable Inglís.”    Then I pointed to myself and stretched out my hand and said,  “My name is “PaMELa,” with emphasis on the second syllable because I’ve learned it’s easier for non-English speakers to hear your name if you pronounce it this way.   For example, David would be DaVEED and Susan would be SuSANNah.    I pointed to the doorway and with raised eyebrows  said “Casa?”  The father and daughter stood up promptly and welcomed me through their front door.

Sensing their warmth and receptivity to a complete stranger whose name they couldn’t pronounce,  I pointed to my camera  and  asked if I could take pictures.  The daughter giggled nervously, but she and her father posed for me as they showed off their colorful but simple house decorated with large pink tiles and walls painted blue.

Beyond the kitchen was a small room with cement rubble and debris on the floor.   Since this room was partially open to the sky, I wondered whether Hurricane Irma had torn off the roof when it made a direct hit on Cuba in 2017.   When the father, eagerly posing for another picture, pulled back a curtain, all three of us squeezed into an already cramped bedroom with two beds and a dresser all close together.

With no other adults present, I asked about “MaMA.”  With a stone-faced expression, the man pointed to a framed picture on the bedroom wall that was covered with a piece of cardboard.  He took down the frame and gently removed the cardboard so that I could see a portrait of MaMA.   The daughter, trying to explain the situation, took her index finger and in a throat-slitting gesture indicated that MaMA was no longer alive.  Although it wasn’t entirely clear to me how MaMA had died, I don’t think she was murdered.  However,  It did make me wonder about the cardboard. 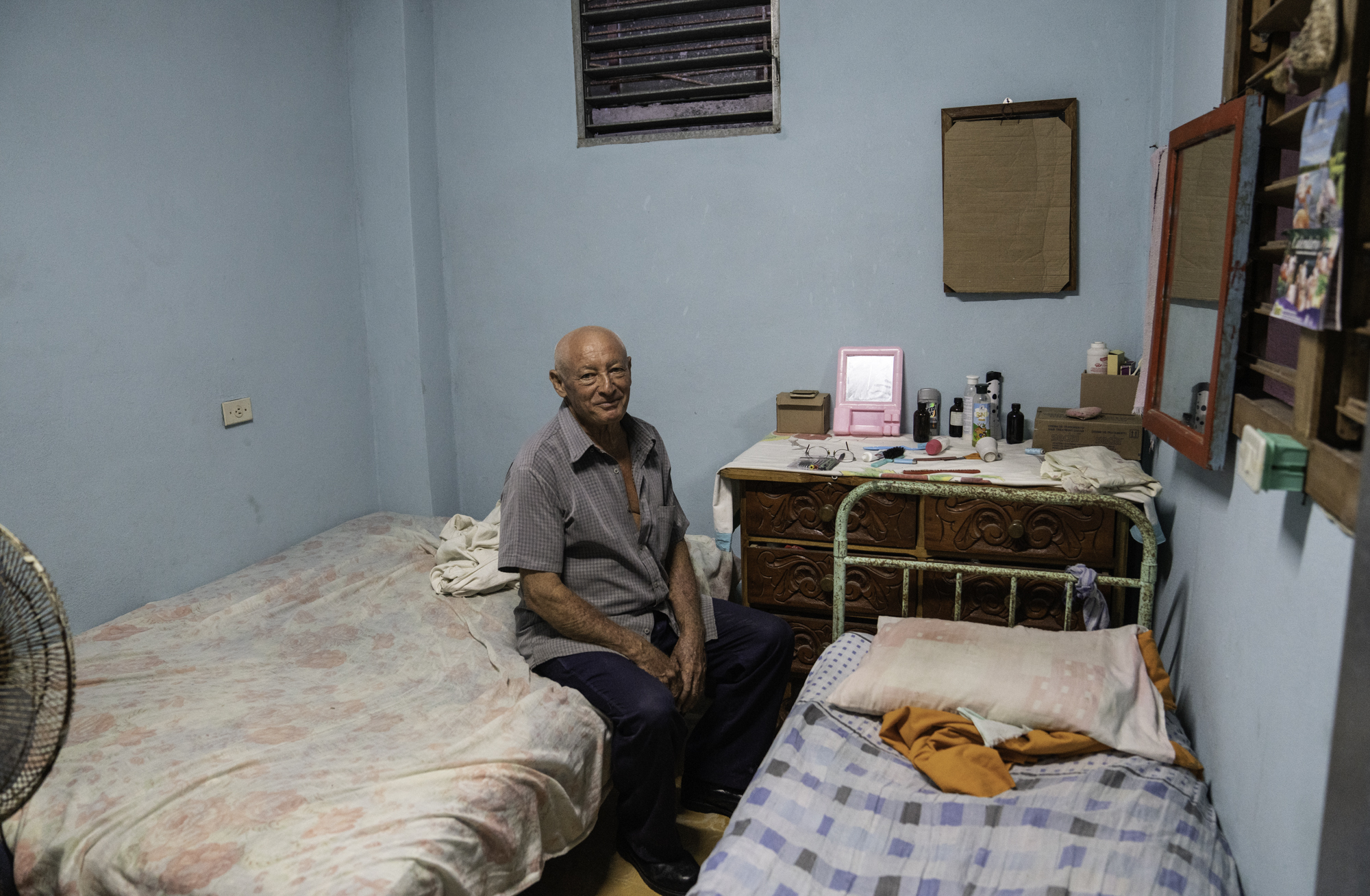 Just as I was about to say good-bye and head up the hill to my hotel, a young girl, maybe 7 or 8, wearing her school uniform entered the house with her mother walking right behind her.  Although I had no idea what the father said to them in Spanish, the two greeted me with smiles and hugs like I was a long-lost relative.  I’m sure this was an older daughter and maybe his grandchild. 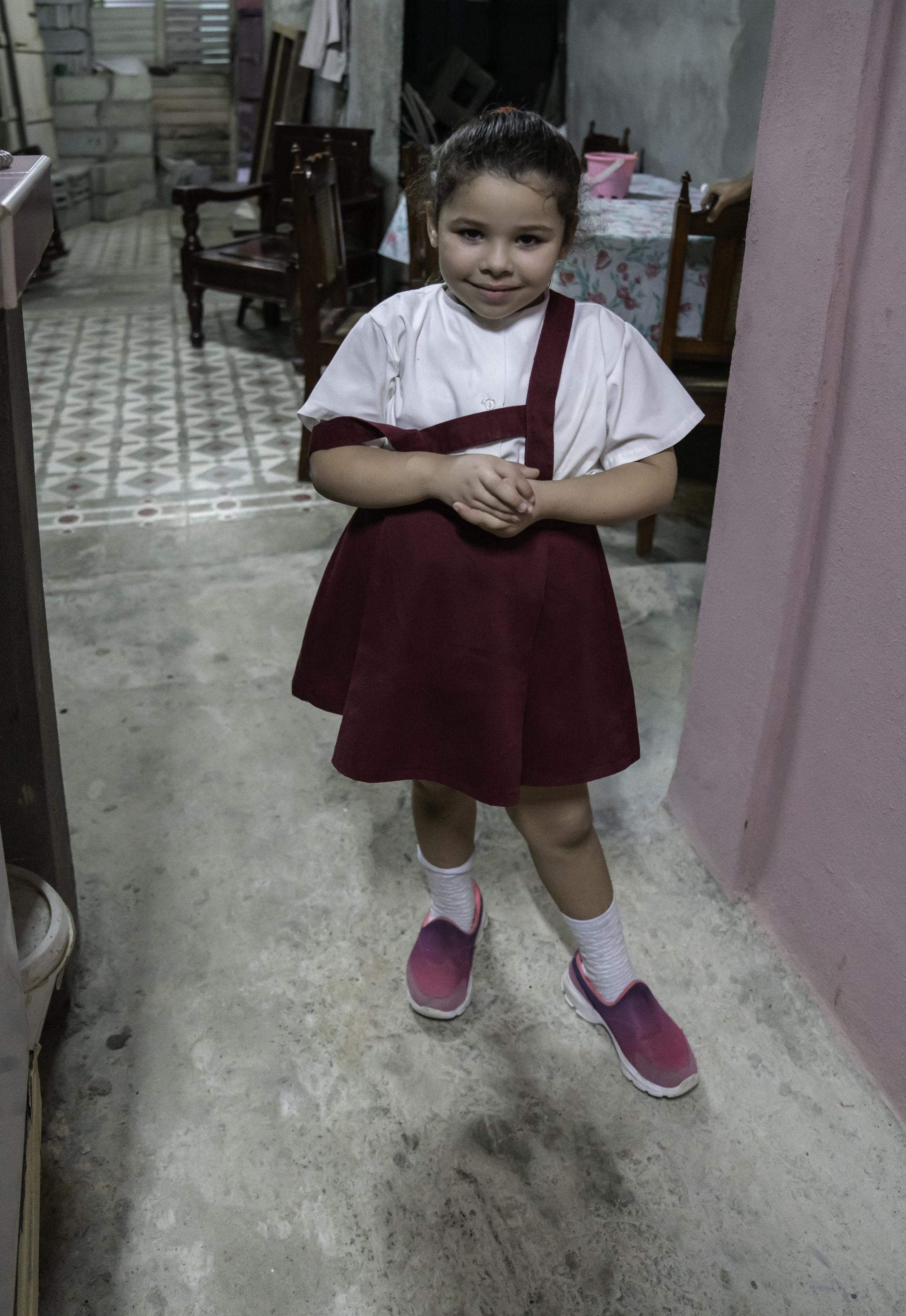 The family stood together in the doorway and happily posed, so I could take more pictures.  Then I remembered the package of kids’ socks I had in my backpack.

As I walked up the hill I reflected on the openness of this family, their sense of pride in showing me their humble home, and their warmth as they shared themselves with me.  These are the personal encounters I yearn for when I travel.  Cuba gave me what I hoped for and so much more.