Antarctica seems to affect all visitors the same way. You can’t get the experience of IT out of your head. You dream about IT. You think about IT. You smell IT. And yet, while you are there, IT is difficult to comprehend, to grasp, and even more impossible to describe. You just have to be there, and once you are there,
IT will be imprinted on your brain forever. And IT wasn’t just the wildlife, the scenery, or the snow and ice that impressed me. When I set foot on my seventh continent, I visualized where I was standing on the globe’s map, and realized I was walking at the very bottom of our planet in the largest wilderness on earth. I was so far away from civilization and so remote, I wondered if I should be scared. I was also somewhere in an immense ocean chock full of ice that came in many sizes and shapes. There was thin ice with raised edges called pancake ice, brash ice pieces that were much larger, and tabular icebergs standing tall like a high rise
in Manhattan. All of this natural beauty plus an abundance of exotic wildlife was so breathtaking that I had trouble getting my head around it. Some times it felt like a dream. In some ways it’s like gazing at the nighttime sky and seeing billions, maybe trillions of stars, and thinking how small and inconsequential you,
as a human being, are in the universe. That’s just one of many feelings you get when you are in Antarctica. As a human living on this amazing planet, I am almost nothing, like a speck of dust, a grain of sand, and in this case, a five foot five woman from California wearing a bright yellow waterproof parka and carrying a camera.

Here are some basic facts: Antarctica’s cold temperature and its dry, windy conditions prevent the formation of mature soils which, not surprisingly, makes it unsuitable for plants or animals. However, animal life abounds in the seas surrounding the continent, like migratory seabirds and marine mammals, which are able to exist for several reasons. Because the sea water is so cold, it contains higher quantities of carbon dioxide and oxygen; storm-tossed seas create upwellings of essential nutrients like phytoplankton; and the long hours of daylight during the summer months promote almost continuous photosynthesis which enables an algae bloom that is the basis for the Antarctic food chain. 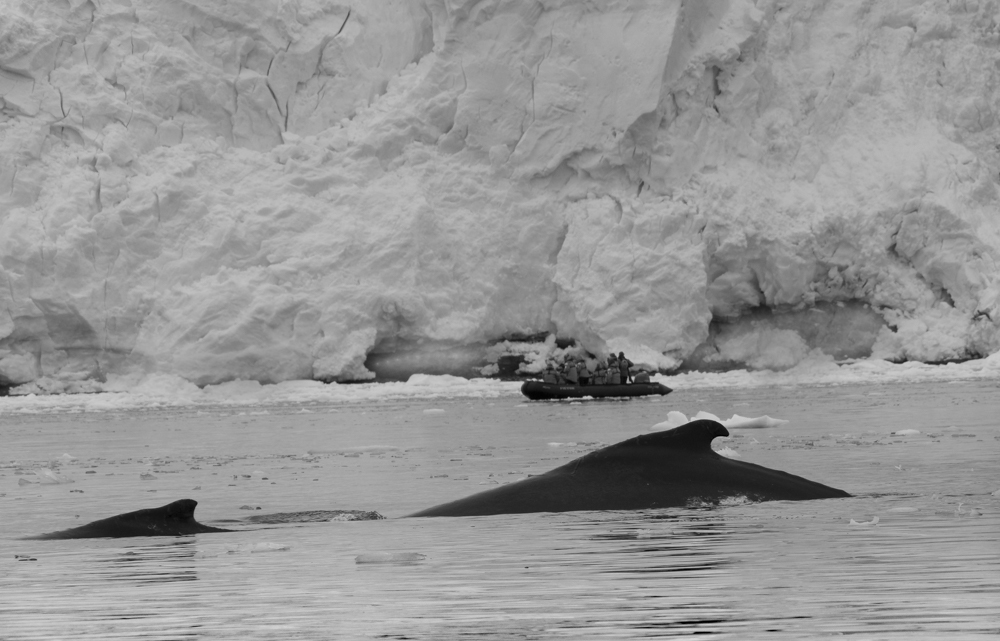 We moved through the sea ice in inflatable rubber zodiacs, which accommodated ten passengers plus an experienced driver-guide. The speed of the zodiac was determined by the ocean’s swells, but often it was based on whether we were searching for specific sea life or just sitting still and observing spectacular sights
like crabeater seals and a pod of whales lunch-feeding on an abundance of krill. Spotting a whale off in the distance gave us reason to rev up the throttle, hoping we’d move fast enough to catch a humpback breach or find a pod of orcas. But most of the time we motored slowly, looking for lazy weddell and leopard seals basking on ice floe, or reveling in the graceful aviation of the terns and albatross that flew overhead. With some envy we watched a few of our fellow adventurers dressed in dry suits and standing on paddle boards, which gave them an entirely different perspective or at least bragging rights. But the people who really had something to brag about were the brave souls who did the polar plunge. Some travelers chose to kayak rather than take a zodiac, but that required an additional effort that wasn’t going to necessarily give me better photo opportunities.
Occasionally, a family of gentoo penguins would swim next to our zodiac as if asking to hitch a ride, but most of the time we visited their smelly habitat and admired their antics on land. Here in Antarctica the gentoo and chinstrap penguins seemed aloof, a behavior that was far different from the bold and curious king penguins we spent time with in South Georgia. 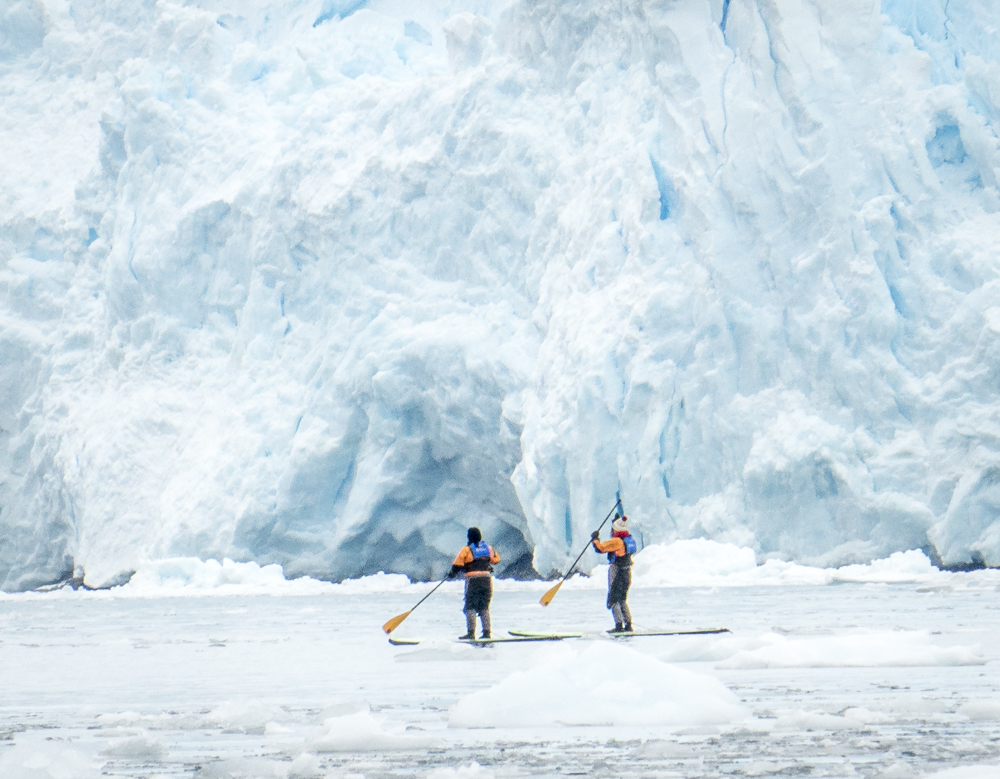 On one of our outings in the zodiac we picked up a piece of sea ice and found it surprisingly unsalty. That’s because sea water freezes at about 28.8 degrees (F), depending upon its salinity. The greater the salt concentration, the lower the temperature at which water freezes. Our guide explained that ice, which forms slowly on the sea surface under calm conditions, is generally not salty to the taste. We hauled the big chunk of glistening ice back to the ship, which was then broken up into smaller pieces so we could enjoy our favorite cocktail on the “glacial” rocks. 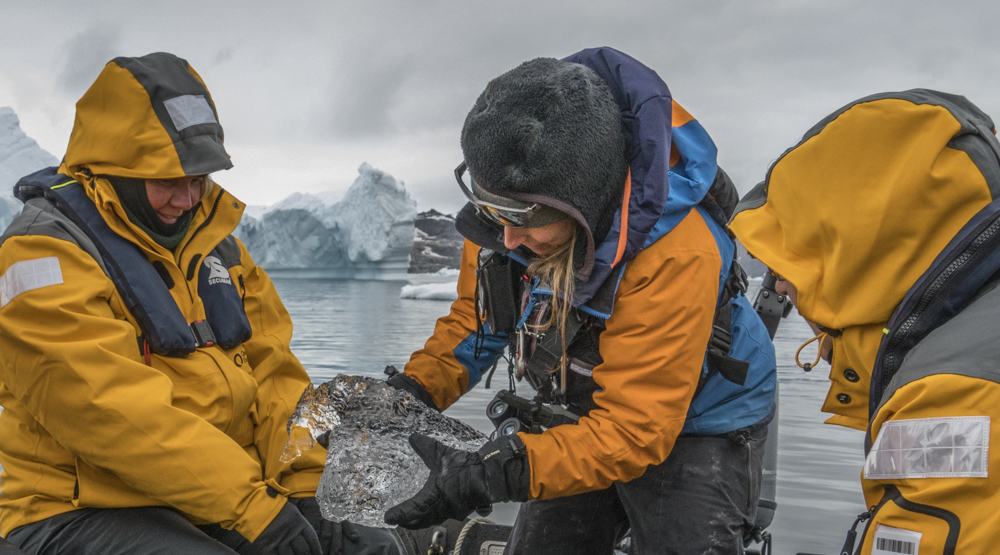 Late one afternoon Mette, our zodiac driver and guide extraordinaire, shut off the motor in the midst of a floating garden of ice chunks and asked if we could take a few minutes to sit quietly in the zodiac and not move. Her instructions were simple. “Please, stay still, do not speak, and don’t adjust those noisy velcro straps. I want you to experience Antarctica in a different way.” Immediately all eleven of us fell silent, and a few minutes after closing my eyes, I tuned everything and everyone out and went deep inside myself to feel, to absorb and, as Mette said, to experience Antarctica. So, what did you hear? someone might ask. I heard nothing. I would answer. Antarctica is silent. Well, almost nothing, almost silent, because what I did hear was the glacial ice pack breaking and breathing around us, sounds we wouldn’t hear with the zodiac running. Meditating in the silence of Antarctica triggered so many emotions within me that I could feel the tears. What is it about nature that evokes out-of-the-blue emotion? This is not the first time this has happened. I experienced the same emotional response in Yosemite Valley last year. Although I am not a religious person, I felt as if God reached down and touched my shoulder. When I finally opened my eyes, I realized this was not God. Instead I was touched by the magic of nature. I was experiencing the last paradise on earth. 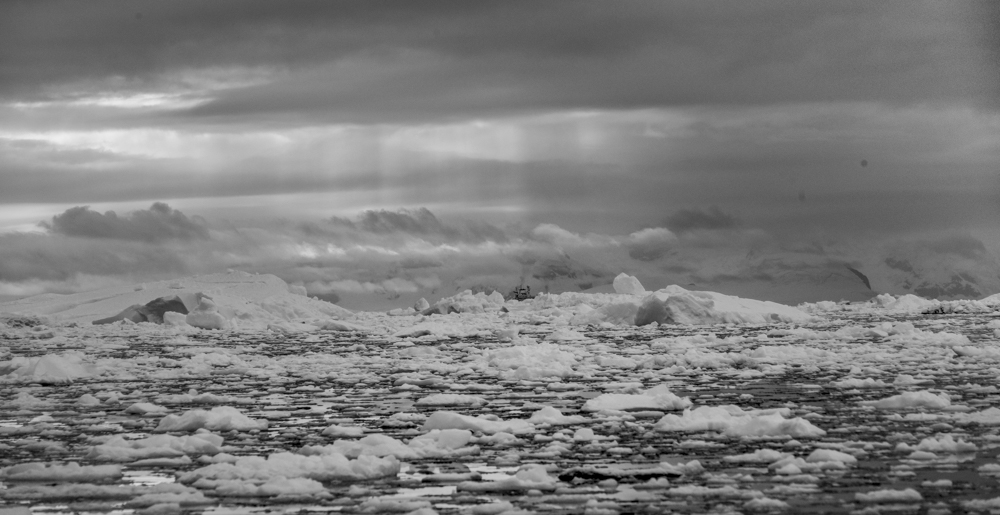