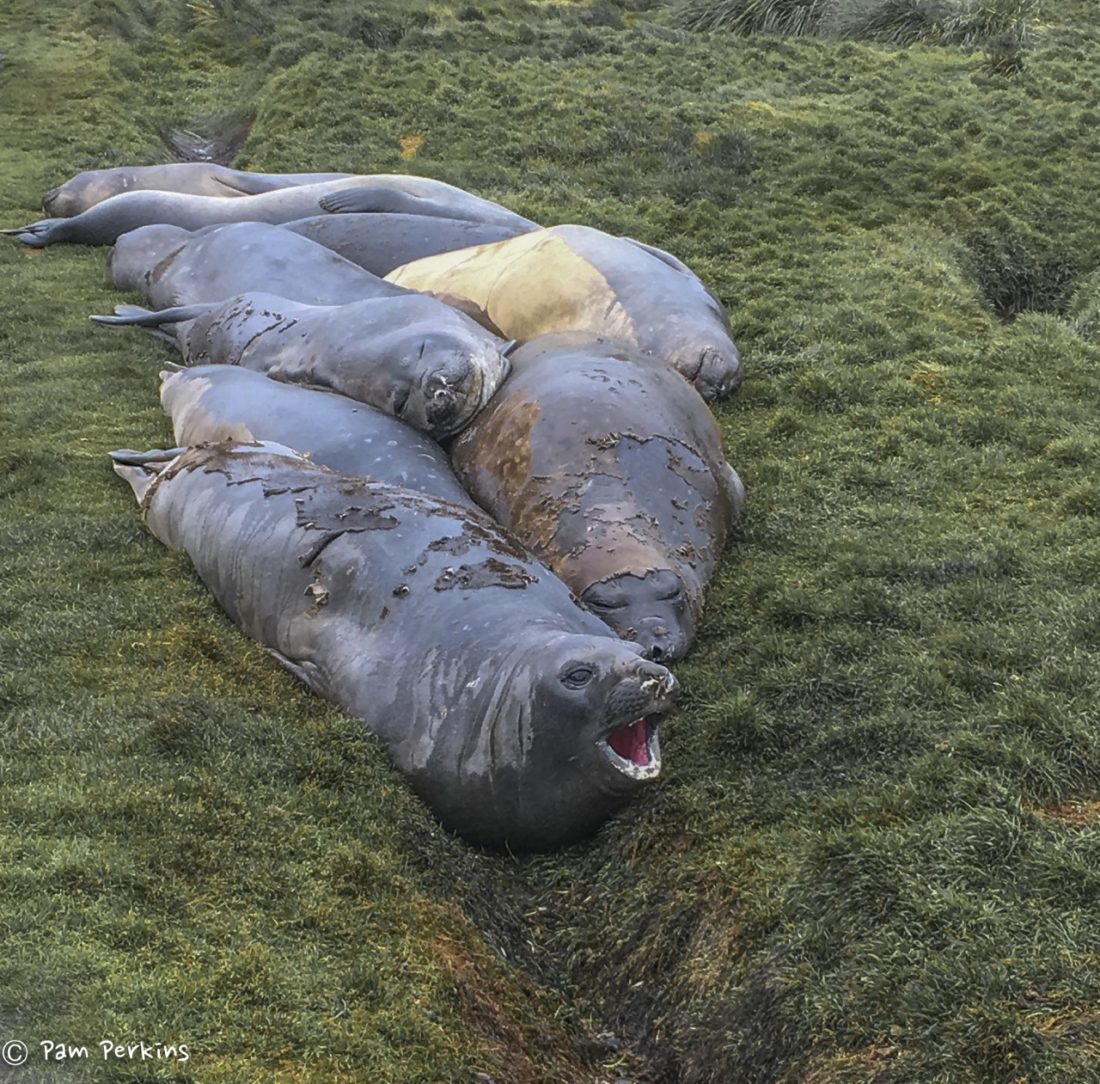 As a major element of our 2017 trip to Antarctica with Quark Expeditions, we spent three full days exploring the amazing island of South Georgia, not exactly on the way to the Antarctic Peninsula from our embarkation point at Ushuaia, but well worth the three-day southeasterly jaunt on the open but calm sea. South Georgia is a 100-mile spit of land in the Antarctic region, made famous by intrepid explorers, like Captain Cook in the 18th century and and Ernest Shackleton in the 20th century. But in most recent times the primary reason adventure travelers go there is to see the amazing wildlife, like the king penguins, the gentoos, the fur and elephant seals, and the unique bird life, 87 species having been recorded there in 2012.

Of course, the wandering albatross is the superstar that most birders are anxious to see, since they have the largest wingspan of any bird, with a record measurement of 11 feet 10 inches. The wandering albatross also live their lives to the fullest, some as long as 60 years, but they are slow breeders, so numbers are falling fast. Due to their very sensitive organs that allow them to sense tiny changes in air pressure and wind velocity, wandering albatross fly from South Georgia thousands of miles northward, always over open water–sometimes as far as the seas off Brazil–to obtain food for their nestlings, often carrying 2-5 pounds of ingested food for a period of eight days while covering up to 5000 miles. This would never be possible without extremely energy-efficient flight.

Fur seals get their name because of their very dense coat, which made them ideal targets for commercial exploitation in the 19th century. But fortunately the days of whaling and sealing are behind us, and South Georgia is a pristine wilderness for all wildlife and fortunate travelers, like me, to enjoy. When our zodiacs landed and ten humans dressed in bright yellow jackets popped out on to land, the frisky fur pups, with globe-like eyes, bluff-charged us, but we were warned to shoo them away because they have a deadly bite. “Fur pups are a bit like Woody Allen,” our expedition leader explained. “They charge with exuberant
confidence, but when you clap your hands to shoo them away, they back off in a quivering, self-conscious sort of way.”

You already know from previous chapters what made South Georgia really special for me. It was not just the incredibly beautiful landscape. It was the hundreds of thousands–maybe even millions–of adult King Penguins and their somewhat ugly but still adorable chicks, who are slowly losing their fur coats in exchange for one made of silky feathers. I’ve been home from my trip for almost a month, and I still dream about penguins. And I swear I still smell their poo. Since adult penguins have no natural land predators, they are fearless and comically curious. At our first landing, dozens of them waddled down to greet us at the beach, whacking each other with their stumpy wings, as if to say me first, and pecking at our boots. The squawking noise from the immense throng was deafening, but still music to our ears. During our three days exploring different parts of this beautiful place, I felt as though I was able to communicate with the king penguins. As you will see from my photos, there were many times when a penguin came so close to me that I was able to see the gleam of light in his eye.

Because the breeding season was over for elephant seals, we only saw the lazy females sleeping and sunning themselves in the grass. Since I’ve seen plenty of elephant seals on a few beaches in California, these behemoths were not a novelty to me. Nonetheless, combined with the fur seals, the penguins and the unique
birds, this was a jaw-dropping experience.

We were told that currently 1500 square miles of South Georgia are covered in ice and permanent snow, but we saw significant evidence of climate change as glaciers were receding. Because we were in this region during the Antarctic summer months, the temperature was quite tolerable, especially when one is wearing four layers of clothing. However, except for the times we rode in the zodiacs, which brought on a wind chill, I seldom wore gloves when taking my pictures.

While there are no permanent inhabitants on the island, there are a small number of people operating research stations during the summer months. There are also a few people, mainly volunteers, who operate the museum and a bookstore at the small outpost called Grytviken, which in the early 1900s was the site of a thriving whaling industry, evidenced by the old ships and decaying equipment left behind. Grytviken is also the final resting place for Ernest Shackleton, whose grave we visited on February 15th, which ironically was
Shackleton’s birthday. How many visitors are able to stand at this famous spot in front of this remarkable man’s grave, sip some Irish whiskey, and listen to our expedition historian, Jonathan Shackleton, toast his distant cousin. Grytviken also has a small but iconic church that was pre-fabricated in Norway and erected by workers at this South Georgia site in 1913. Despite efforts to preserve the church, as well as remnants of the historical whaling days, harsh winter storms have made renovation and restoration a difficult and expensive enterprise.
Purchases and contributions by visitors to the gift shop and museum help in this effort.

South Georgia was a spectacular experience, a hard act to follow, I thought, as we sailed away toward the continent of Antarctica. But our visit to the Antarctic Peninsula was no let-down, as I will describe in Chapter 4. 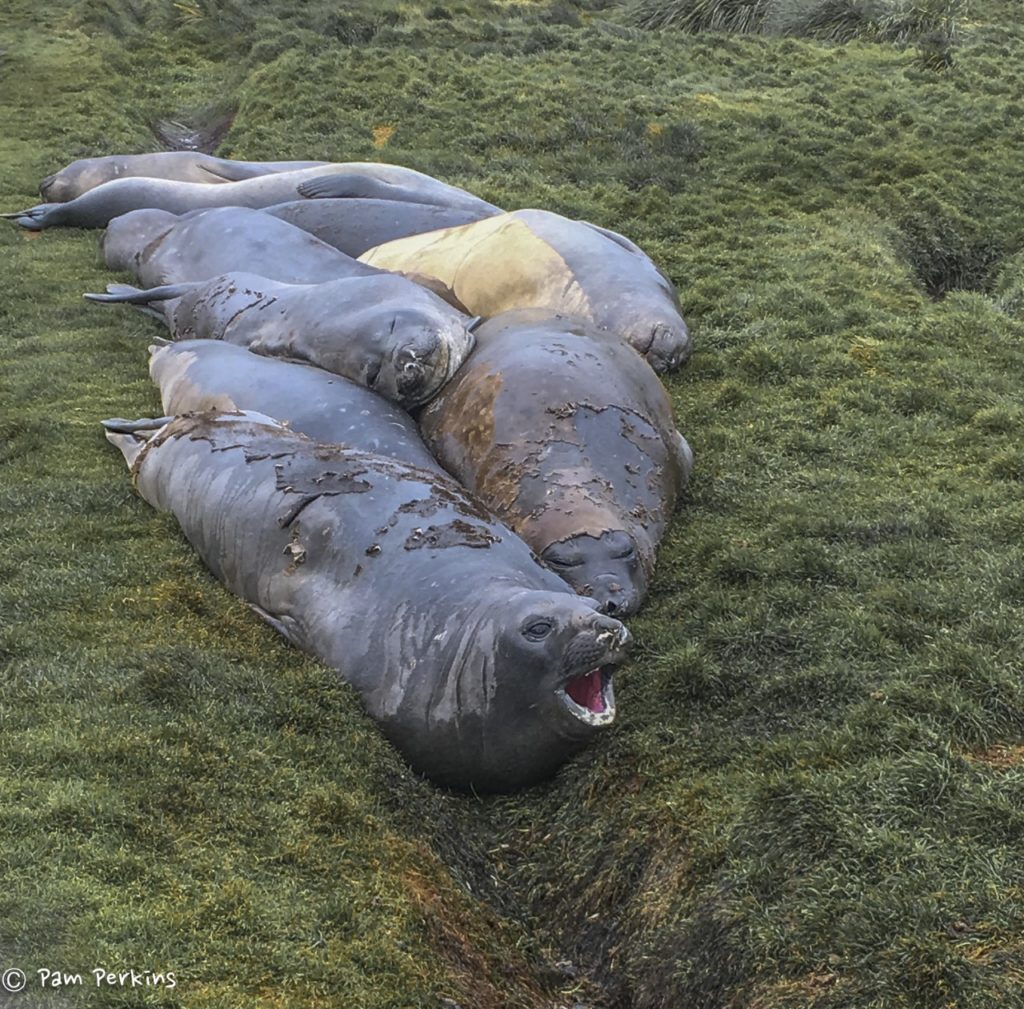 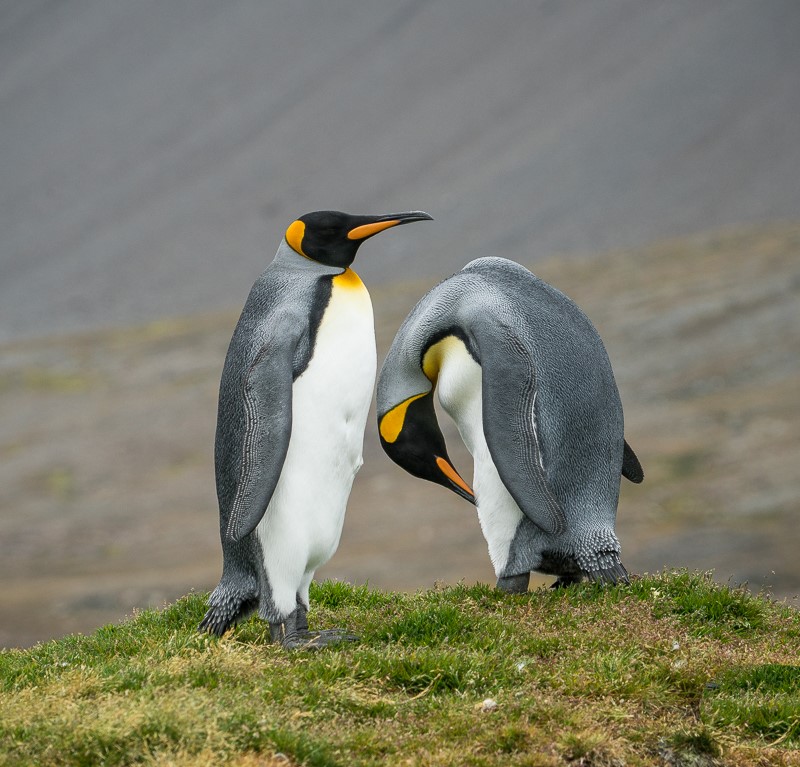 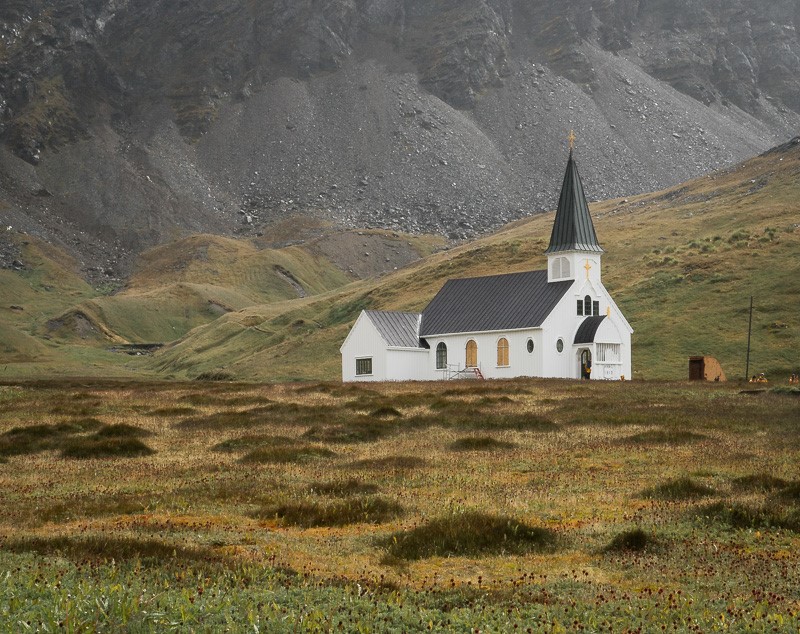 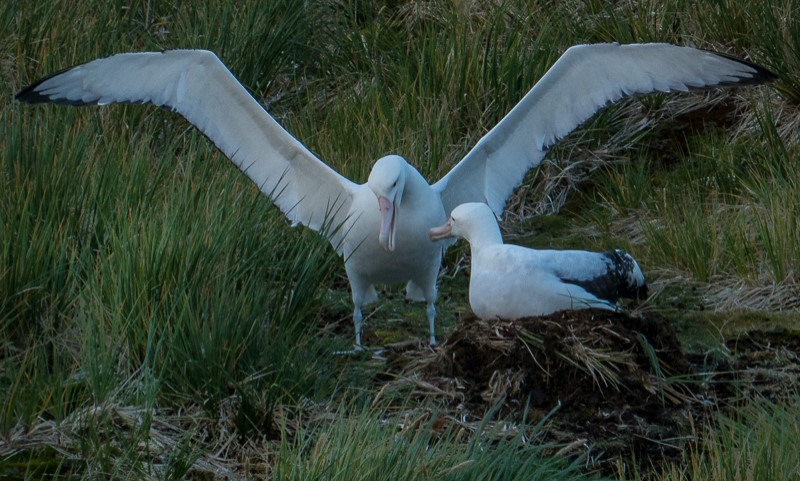